The History of Geosciences on the Telegrafenberg

The "Albert Einstein" Science Park on Telegrafenberg in Potsdam, formed by Helmholtz Centre Potsdam - GFZ German Research Centre for Geosciences, Alfred Wegener Institute for Polar and Marine Research (AWI, Location Potsdam), and Potsdam Institute for Climate Impact Research (PIK), is one of the locations for science in Germany richest in tradition.

For about 150 years the Telegrafenberg is a location of research institutions, where impulses are set and spread globally.
Here, the world's first Astrophysical Observatory was build, the cradle of scientific geodesy and systematic measuring of the Earth's magnetic field is located, and here is one of the birthplaces of German meteorology. 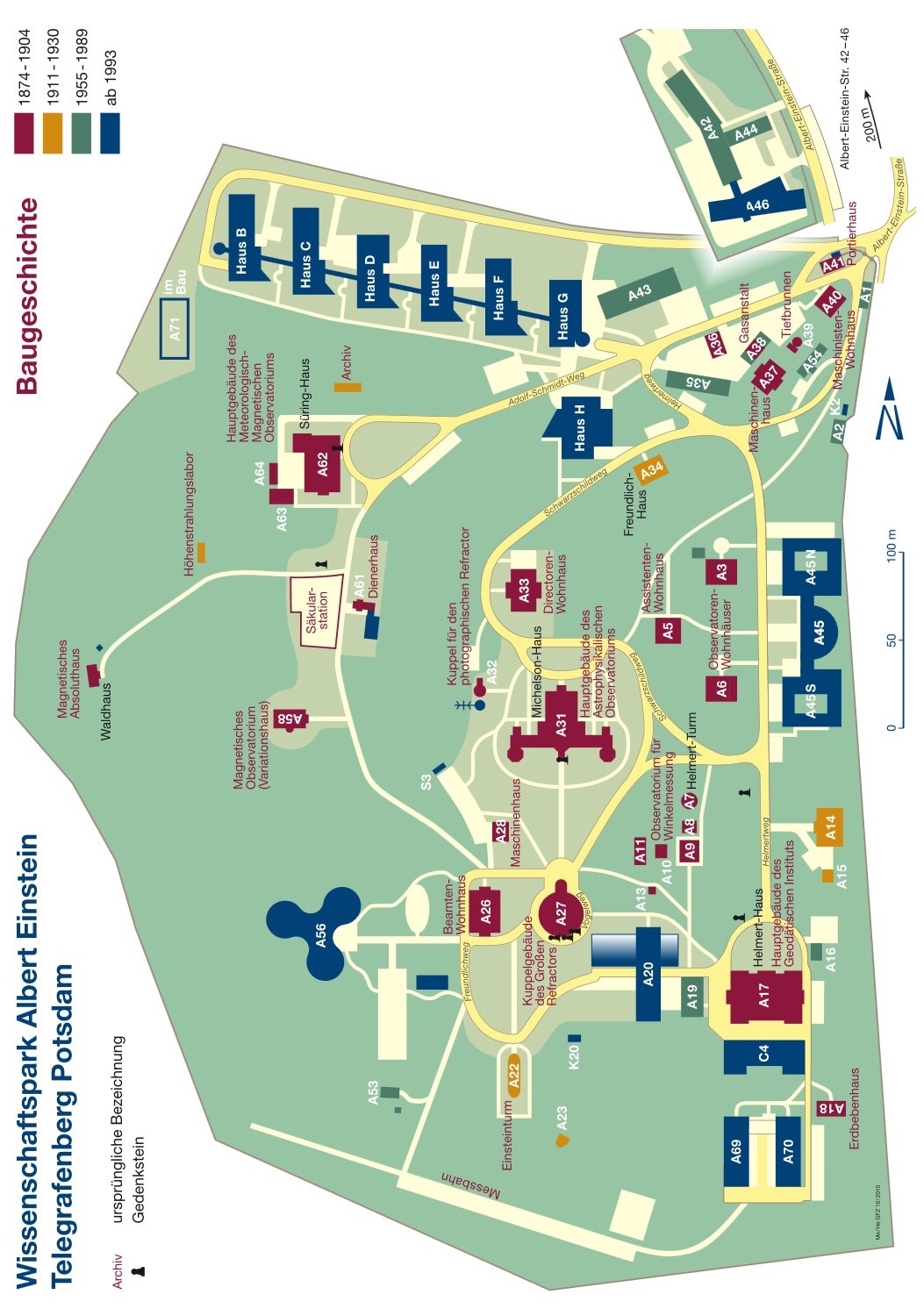 The Telegrafenberg got its name in 1832, when the fourth station of a line 62 stations of optic telegraphy from Berlin to Koblenz was installed here.

Already in 1849 optic telegraphy was replaced by the introduction of electric telegraphy.

1832/33: The Telegrafenberg got its name as a station of an optical telegraphy line built to link Berlin with Koblenz via Potsdam.

1870: The Royal Prussian Geodetic Institute is founded in Berlin under its first director, Lieutenant-General Johann Jacob Baeyer, as a research institute of the European Project for the Measurement of the Figure of the Earth. After the Geodetic Institute transferred to Potsdam, Baeyer's successor Friedrich Robert Helmert established Potsdam's worldwide reputation as a centre for geodesy and gravity research.

1881: In the basement of the Astrophysical Observarory Potsdam, today "Michelson Haus" building A31, the historic Michelson experiment is carried out. While trying to prove the existence of a substance ether that was postulated to be the medium of the propagation of light Albert Michelson proved its non-existence. Michelson was honored with the Nobel Prize in 1907 for his optical precision instruments and his therewith realised spectroscopic and metrologic experiments.

1889: In Potsdam the first teleseismic recording is taken of an earthquake near Japan by Ernst von Rebeur-Paschwitz.

1890: The Geomagnetic Observatory is founded in Potsdam.

1892: Inauguration of the Geodetic Institute at the Telegrafenberg - today one of the GFZ main buildings (A 17).

1898-1904: Measurements of the absolute gravity value in Potsdam which in 1909 is accepted as the international reference until 1971.

1933: Two quartz-chronometers are put into operation for the official time-service. Precise time measurments provide the basis for observing fluctuations in the Earth's rotation.

1992: Foundation of the GeoForschungsZentrum Potsdam GFZ on the 1st of January. As the first of its kind, GFZ unites all sciences of the solid earth under one roof.

1995: Launch of GFZ's first own satellite mission: the laser satellite GFZ 1 is put into orbit from the space station MIR (April, 19).

1996: Start of the International Continental Drilling Program ICDP, lead managed by the GFZ.

Inauguration of the new GFZ-Buildings (building B to H), June, 2.

1999: Inauguration of the renovated Geodetic Institute, today the residence of Department 1 and the library on July, 6.

2000: Launch of the GFZ-Satellite CHAMP (Challenging Minisatellite Payload) on July, 1.

2002: Launch of the GRACE tandem satellites (Gravity Recovery and Climate Experiment) on March, 17.

2005: On behalf of the German Ministry for Science and Education, in January the Helmholtz Association under the lead of GFZ begins to set up an tsunami early warning system for the Indian Ocean (GITEWS). GITEWS is part of the flood aid programme of the Federal Government and is set into operation after the Tsunamy of December 26th in 2004, in November 2008. On March 29, 2011 GITEWS is handed over to the Indonesian Government.

2013: Inauguration of the Helmholtz Lab for the Geochemistry of the Earth Surface  HELGES (June, 11.) and the new SIMS-Lab(Sekundary Ion Mass Spectrometer, August, 20).

2015: Inauguration of the Observatory "GONAF" - Turkey